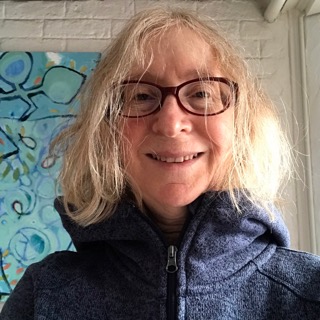 Bobbie has always been involved in the visual arts in one way or another. Currently she devotes all her artistic energy to creating one of a kind art in a variety of media. She is a founding member of the OUTLOUD group of abstract painters, that exhibited widely in the Washington area, and STICKS & STONES, a small collective of artists working in a variety of media in western Massachusetts. She is also an associate member of Zea Mays Printmaking. For many years she owned the graphic design consultancy Salthouse Design, and previous to that, worked as a designer for a number of advertising agencies and publications, including Seventeen Magazine and House Beautiful Magazine.

Bobbie studied painting, drawing, graphic design and advertising at the School of Visual Arts in New York and studied painting with Helen Corning at the Yellow Barn Studio, Glen Echo, MD. She graduated from Bryn Mawr College with a B.A. in the History of Art. She also holds an M.A. in Art History from the University of Pennsylvania.

Bobbie's work is in private collections in Maryland, Massachusetts, New Jersey and Pennsylvania.